Popular Yoruba freedom fighter, Sunday Adeyemo, also known as Sunday Igboho, has said he has what it takes to fight against Boko Haram without the government’s support 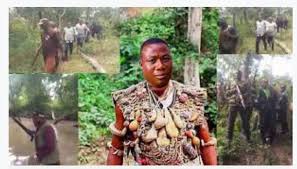 He said, “That which I will use in the fight against Boko Haram, I have it already.”

The video resurfaced after the former Senator representing Kaduna Central, Shehu Sani, called on the Nigerian government to invite Igboho to help drive Boko Haram terrorists out of the Sambisa forest.

Following the recent activities of Igboho, which he said were to rid the South-West region of killer Fulani herdsmen, Sani opined that Igboho could help end terrorism in the country, particularly in the North-East, if given a chance.

He said the activist should be invited to help flush out Boko Haram sect from the dreaded Sambisa forest in Borno State.