At about 9 a.m., a series of controlled explosions were heard before the 39-story building imploded on itself. The whole process unfolded in less than 30 seconds, from start to finish. 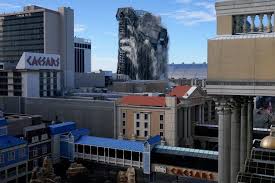 The plaza was purchased by billionaire Carl Icahn in 2016. He also purchased the Trump Taj Mahal, which he later sold to Hard Rock Café International, NPR previously reported. 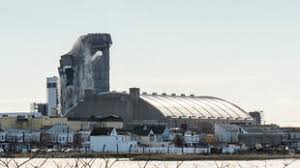 Controlled demolition for Trump Plaza was originally scheduled for Jan. 29. The city had planned to auction off the chance to blow the building up to the highest bidder, pressing the button from anywhere in the world or on scene. Neither came to pass — the demolition was delayed and the once-in-a-lifetime opportunity was kiboshed by Icahn.

Atlantic City Mayor Marty Small had hoped to raise more than $1 million for the Boys and Girls Club of Atlantic City from the auction, but Icahn’s company canceled the fundraiser amid safety concerns, AP reported. However, Icahn said he would donate $175,000 to replace the funds lost from the event.

The rubble, which stands nearly 80 feet tall, is scheduled to be removed by June 10. The lot will be paved for parking until a new project comes about.

Small told the AP he got chills during the demolition. “This is a historic moment,” he said. “It was exciting.”

Toots and The Maytals – Reggae Got Soul

Toots and The Maytals – Pressure Drop