A Nigerian man has shared a video in which he was tagged an “armed robber” by policemen who he queried on being absent while thugs fought in Obalende area of Lagos on Thursday February 11.

The man who walked on a different side of the road which had a mesh barricade from where the policemen were seating, was heard telling the security operatives that they only arrest young protesters but are absent when thugs fight. 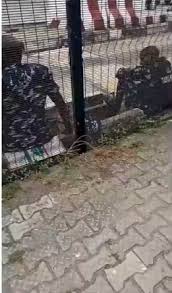 While walking away, a policeman was heard calling him an “armed robber” to which he chuckled.

@bigheadeddudes shared the video with the caption;

I asked the policemen where they were when guns were blazing at Obalende yesterday, they called me an armed robber