The Nigerian government has rejected Sunday’s toppling of the Alpha Condé regime in Guinea.

The country’s foreign ministry on Sunday said the putsch was a violation of the ECOWAS protocol to which Guinea is signatory to.

“The Nigerian government is saddened by the apparent coup d’etat that has taken place in the Republic of Guinea today, in clear violation of the ECOWAS Protocol on Democracy and Good Governance,” the ministry said in a statement.

“The government of Nigeria strongly condemns and rejects any unconstitutional change of government and therefore calls on those behind the coup to restore constitutional order without delay and protect lives and property.”

Also, in a tweet, UN secretary-general, António Guterres, also condemned “any takeover of the government by force of the gun.” He called for “the immediate release of President Alpha Condé.”

Members of an elite military corp led by Mamady Doumbouya, a colonel, had opened fire on the presidential palace in the capital, Conakry, and taken President Alpha Condé into custody.

The dissenting military official were believed to have staged the coup on the heels of a move by the parliament to increase the salaries of politicians while slashing the budget for security forces.

Others believe his alteration of the constitution to pave way for his third term agenda did not go down too well with the military echelon, in a country with long history of coup d’etat. 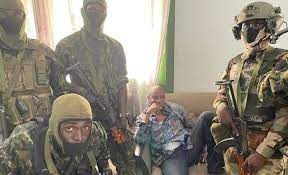 Some say the putsch was fanned by the level of poverty in the country despite being home to the world’s largest reserves of bauxite, the main source of aluminum for cars, beer cans and foil wrap.

In a video circulating on Facebook, Mr Condé flanked by masked men in military fatigues, was asked by a soldier: “Excellency, have we touched a single hair of yours?” A disinterested Mr Condé gave no response as he looked away from the camera.

Police ungrave body of abducted Rivers pastor killed and buried in shallow grave by kidnappers after...
Fire burns down INEC office in Zamfara LGA
Gunmen Attack Professor Banji Akintoye’s House In Ekiti
Chelsea defender Antonio Rudiger 'rejected' Manchester United approach
'I'm sorry for the upset I've caused' - Romelu Lukaku apologises to Chelsea fans after saying he was...
I made $22.3million in 2021- Davido reveals
Queen Elizabeth 'in wheelchair' as palace look forward for Philip’s memorial
Lanre Gentry, Mercy Aigbe's ex-husband, confirms his son Olajuwon's paternity.
Single people makes 12,272 noise complaints against an airport in 2021 accounting for 90% of the tot...
#EndSARS anniversary: They killed innocent souls and a year later, no one hav been punished for thos...
You should be happy for your partner if they are getting married - BBNaija's Leo Dasilva
2023: S’West group lobbies Govs, Obas to ask Tinubu to step low for Osinbajo
Gov. Okowa's aide slams James Brown's father for posing with his crossdresser son while he was dress...
State Police is not an option- President Buhari
popular celebrity Cara Delevingne goes topless as she rips off her red jacket to unveil gold painted...
''No responsible man will marry you''- clergyman David Ibiyeomie cautions ladies against posting par...
Cristiano Ronaldo and Georgina Rodriguez announce tragic death of one of their new born twins
Britney Spears and Sam Asghari are engaged after nearly 5 years
Obiano's arrest is not political. He has been granted bail but yet to fulfill his bail condition - E...
Woman and her partner show their bedroom skills on live TV while teaching viewers how to achieve max...