Schools resume today for the commencement of the 2021/2022 academic session across the country but it won’t be a cheery return for thousands of pupils, especially in Northern Nigeria, already traumatised by reports of incessant mass abductions.Already, stakeholders have expressed fears over the security of learners and teachers. Data released by United Nations Children’s Fund (UNICEF) in 2018 showed that more than 600,000 children have lost access to education due to disruptions in learning occasioned by kidnapping.

The report said an estimated 2,295 teachers have been killed and over 19,000 others displaced, while more than 1,400 schools have been destroyed, damaged or looted since the insurgency started in the Northeast in 2009.

Save the Children International at the weekend urged the Federal and state governments to put in place mechanisms that would ensure the protection of schools and other learning environments. The organisation said from January to August 2021, more than 1,000 children have been abducted in the country for ransom, with so many of them still in the hands of their abductors.

Quoting UNICEF, it disclosed that the number of out-of-school children has hit 10.5 million amid banditry, kidnapping and COVID-19 crises. Of this figure, about five per cent of the entire population will be missing out on the thrill of resuming in a new class, usually occasioned by the acquisition of new sets of uniforms, books, bags and friends.

“These attacks have been on the increase between 2020 and 2021, which led to the closedown of many schools by the government due to fear of being attacked,” it stated.

Recently, the Nigerian Security and Civil Defence Corps (NSCDC) raised the alarm that over 85 per cent of schools in the country are unsafe and vulnerable to attack by bandits.

Worried by this figure and due to incessant abduction of students by armed bandits in Kaduna, Katsina, Kebbi, Zamfara and Niger states, the NSCDC said its Commandant General, Dr Ahmed Abubakar Audi, initiated ‘the Safe Schools project’ and established the female squad of the corps to ensure safety in schools.

Mercy Gichuhi, Country Director, Save the Children International Nigeria, said: “When education is under attack, a generation is attacked. Children, girls and women are more vulnerable at times of attack, putting them at a higher risk of trauma, fear, gender-based violence, physical and sexual abuse.

“Many children in such times will have no choice but to discontinue their education and some will never return to school, with their childhood dream fading away.”

According to her, a recent report by Save the Children, titled: ‘Build Forward Better’, revealed that the DRC, Nigeria, Somalia, Afghanistan, South Sudan, Sudan, Mali, and Libya have education systems that are at ‘extreme risk,’ while Syria and Yemen follow closely behind.

The last mass abductions of children occurred two weeks ago when 73 students were kidnapped from Government Day Secondary School, Kaya in Maradun Council of Zamfara State, few days after nearly a hundred pupils of Tanko Salihu Islamic school, Tegina in Rafi Council of Niger State, was released after three months with their abductors. Lagos State witnessed such an ugly incidents in 2017 in the Epe area of the state.
CHRISTIAN Association of Nigeria (CAN), Kaduna State chapter, has cried out over the alleged unconcern of the state government on the fate of the 31 students of Bethel Baptist High School, Damishi, Kaduna, still being held by bandits. Chairman, Rev. Joseph Hayab, said the government has abandoned the children in the bush with the bandits and is unconcerned whether they are released or not.

In a statement, yesterday, he said: “The silence about the 31 Baptist High School children, still in the hands of their captors, is bad and condemnable.”

He said: “These children were taken away from their school on July 5, 2021. It is 67 days today. And our leaders are silent as if all is well when truly all is not well. How can it be well when the parents of these 31 children have not known sleep for these 67 days? Any caring leader will also not sleep.”

He said: “These children should be released or rescued without delay. We all know that Kaduna State Government closed down schools for over a month, claiming that the military will go after bandits. It has, again, asked all schools to reopen without bringing back our children.

“What happened with the military exercise that led to the closure of schools? Was it just another drama to divert the attention of parents and those sympathising with the parents from the real situation? The church in Kaduna State will never keep quiet till all our children and everyone in captivity is released and returned home.”

STAKEHOLDERS, including security experts, educationists and non-governmental organisations have lamented the lack of perimeter fencing, security gates and trained security personnel in some public schools. They have also called for improved security in schools, especially when it came to light that Government Day Secondary School, Kaya, was not only dilapidated but also bereft of perimeter fencing.

A parent, Mrs Bimbo Olaokun, appealed to government and school owners to make the security of children and teachers their priority. Olaokun said schools should be properly fenced with security personnel stationed at the entrance to prevent invasion by hoodlums.

“The insecurity in Nigeria today is not something to joke with. Even people are not assured of safety in their houses not to talk of a school that has no fence or gate. The government should help us and save our children’s lives,” Olaokun pleaded.

National President of Parents Teachers Association of Nigeria (PTA), Alhaji Haruna Danjuma, has also appealed to governments at all levels to end incessant attacks on schools. Danjuma said the best approach to ensuring safety amid growing insecurity and kidnapping in schools is to make it everybody’s business and should not be left alone in the hands of security personnel.

The PTA chief said since the government does not have enough security personnel to assign to public, private and faith-based schools, parents and community leaders should mobilise hunters’ associations, members of vigilante groups, volunteers, retired military and paramilitary officers in every community to protect schools.

“That is what the national body, in collaboration with state chapters are working towards to secure and protect schools.”

He stressed that there is a need for the Federal Government-controlled security forces, including police, military, civil defence, and para-military officers to halt the activities of bandits.

Besides, Kanu said it has become imperative to make pupils aware of themselves and their environment, with respect to security issues as currently being experienced in Nigeria.

He said: “We have insisted that schools must have fences. If anybody crosses the fence, then one would know that such a person has an ulterior motive. AFED is enjoining parents to allow their wards to resume; government and school owners are doing their best to ensure that schools are secured. Children are part of the future and we should not allow anything to derail them.”

On his part, National President, All Nigeria Conference of Principals of Secondary Schools (ANCOPPS), Anslem Isuagie, said as schools resume, the safety of school children rests on the government.

Isuagie said the government should do the needful to protect everyone within the system, either by way of providing fences or community policing or through local vigilantes within the community.

“Alternatively, while it may not be possible to give police protection for schools because they don’t even have enough manpower to adequately safeguard the citizenry, they should employ security guards for schools. Guards that are well trained, who will work for hand in hand with community vigilantes so that in the event of a threat, they can raise alarm immediately. Once the whole community is alerted, banditry and kidnapping will reduce in schools.

The ANCOPPS chief further urged the government to beef up the intelligence unit of the police, so that they can have first-hand information. “In those days, officers from Criminal Investigation Department (CID) had information of what would happen and they knew how to counter it.

“The truth is that government is not living up to expectation. There is nothing the principal, school children or parents can do to safeguard themselves if the government does not come in.

“As schools resume, the government should take safety as a priority, most schools in the north are shut down because of banditry and kidnapping. Government should think of how to safeguard schools before resumption.”

Abdulmajeed Ismail, an educationist and proprietor, said: “Government is killing education system by allowing bandits to dictate when to open schools or not. Efforts should be made to strengthen the security around schools by partnering community associations and local vigilance teams.”
MEANWHILE, the Federal Government has identified a lack of funds and logistics among factors hampering the implementation of the nation’s Safe School Initiative.

The Minister of Education, Adamu Adamu, disclosed this in the foreword he wrote for the 2021 National Policy on Safety, Security and Violence-Free Schools released last week with its implementing guidelines published by the Ministry of Education.

The Safe School Initiative was launched in Nigeria in May 2014 after the abduction of 276 schoolgirls from their school in Chibok, Borno State. The aim of the initiative included moving students in the highest risk areas to schools in safer parts of the country, provision and distribution of learning materials and rebuilding of schools with extra security measures.

Due to incessant kidnappings, there have been calls for the initiative to be revived, but Adamu said the programme’s implementation was being hampered by funds and logistics.

He wrote: “The Safe Schools Initiative has three components, namely: transfer of vulnerable learners in violence-affected communities to safe areas and boarding schools in states not affected by violence; initiation of the safe school model in 10 schools in each of the three states affected by the Boko Haram insurgency; and provision of high-quality education to children affected by the conflicts and living in camps for Internally Displaced Persons (IDPs). 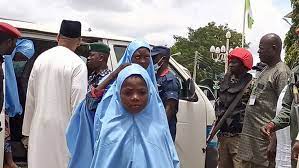 “Although the initiative is hampered by funds and logistics, the three components of the initiative form part of the framework for, and obligation of, the Nigerian government to ensure safety in schools in Nigeria.”

“Accordingly, the country can no longer afford to underestimate the need to map out a coordinated action plan to keep our institutions safe and on alert for security threats.

“This administration will ensure a zero-tolerance approach to any threat to the security of life and property in our schools, including any form of disaster, violence (including gender-based violence), bullying and other hazards in and around schools, including attacks on school buildings due to conflict and war.”