Charles Idibia in another Instagram post, has accused Annie Idibia of allegedly humiliating his brother and her husband, Tuface at every chance she gets. 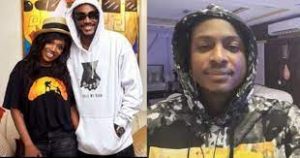 Alleging that Annie “poured food on Tuface at his wedding, threw a bottle of hennesy at him at his work place, shouted at him at the top of her lungs in front of his celebrity friends and acquaintances and fights him at the airport”, Charles stated that she can’t continue to demand for respect from him when she has none for her husband and his family.

Also claiming that the issues have been addressed privately, Charles further alleged that Annie once told her househelps to lock the house doors and send her the keys in South Africa even though she knew her mother-in-law and her grand children were visiting from Abuja.

Charles who asked why he should respect Annie, recounted how the actress allegedly attacked his wife barely three weeks after they lost their baby because they wouldn’t join in her unending wars against Tuface’s baby mamas.

I pray for composure as I write these and I pray for clarity because there is so much to say, This is in no shape or form an attack on anybody, I just want to created a Peaceful space in my heart and move forward .

Annie , I am sure you are shocked that all these is coming from me , because in your heart of hearts you know I have always loved you and treated you the best way a brother in-law should…. not because you gave me reasons to , but because I tried to see you through inno’s eyes , and what he loved I cherished .

Respect is not a title, respect is a gesture …a feeling you give and you feel when you are given , Even thou I have been nothing but respectful to you…you can’t actually be demanding respect from me anymore when you have none for your husband or any for members of his family , his friends or his staffs .

You publicly humiliate him every chance you get , from pouring him food at my wedding to throwing a bottle of hennesy at him at my work place, or shouting at him at the top of your lungs in front of his celebrity friends or acquaintances…fights at the airport …just to mention a few …over matters that could have been addressed privately … Or is it you asking your maids to lock the doors and send the keys to you in South Africa even thou you knew your mum in-law was in the house visiting her son and grand kids from Abuja , and out of respect for herself she came to stay at my house …what was her crime ?

Or is it you attacking my wife,barely 3weeks after we lost our baby …just because she wouldn’t join your never ending war with ‘baby mamas’…and ‘Enemies’ that you create from thin air…just because you said ‘Yes’ and they said ‘No’ …. Pls tell me sis …where should I begin to respect you from?

In another post, Charles also claimed that Annie is quick to mention that her husband has 7 kids and is being sucked dry, but filled up their house with 4 househelps , 2 P.As , a live-in mum, a live-in cousin and a brother at the annex.

Countering claim of Annie’s in-laws not giving her space, he also stated that he only visits the family once in a blue moon and rarely has time to talk with Tuface including asking for money.

Alleging that Annie only replies text messages when it benefits her, Charles accused the actress of “not even sending a good wish card to her in-laws in bad and good times.”

Charles also said that Annie was accepted whole heartedly by her in-laws for the sake of their son and tried to grow in love and harmony with her, but she never saw it because she was already blinded by pre-installed hate. He claimed that the love the actress gives out is only seen on Instagram.

You are quick to shout and mention 7kids and your husband being sulked dry , but you filled your household up with 4maids , 2.P.A’s , a live-in mum, a live -in cousin , and a brother at the annex …all to take care of your 2daughters …the other kids are far away…but somehow its sigular me who visits once in a blue moon from my house in Festac that’s the problem ?…which In-laws haven’t been giving you space in your house…pls tell me?

You think when I sit to chat with inno, which we rarely do …it will always be to talk about money ?…thats all you think we share as brothers ? …because am not a millionaire.

You don’t ever visit , you don’t call or pick up your calls ,you reply text messages only when it benefits you …I am the one who shows up with Gifts on birthdays,and Holidays…tell me Annie , have you ever sent a single Good wish card to your only in-law in lagos , in bad health or in good times? Oh …you are a celebrity, you are busy and always tired ..i should understand right ?. All your love is seen only on Instagram…all for the photo-op (the good wife who accommodates despite all) … because deep down in your heart,you have marked me for war and I am a member of your tribe of enemies you have created in your mind and thou shall never be loved .

Pls …Where are the in-laws who are trying to destroy you marriage ? Funny enough, the ‘in-laws’ accepted you whole heartedly for the sake of their son and tried to grow in love and harmony with you ,but you never saw it …because you were already blinded by pre-installed hate . You should know better not to force us to choose sides over this matter when there are innocent kids involved who are also our sons and daughters , nieces and nephews…all we can do as responsible people Is to broker peace …no matter how difficult . The happiness of the home is for us all …but war is your only language . 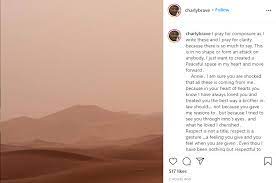 FG issue another warning to Nigerians of deadline for NIN-SIM linkage
Woman choked to death on chewing gum after falling asleep with gums in her mouth
Moment elderly man stole laptop and hides in his pants (video)
UNIJOS former Welfare Secretary reportedly drowns while swimming
'A nuclear war cannot be won and must never be fought' - China, US, UK, France and Russia pledge to ...
IGP: Anambra Election Must Hold, Those Who Attacked Odili’s Home In Our Net
Burnaboy is a better Afrobeat artist than Jay-Z as a rapper - Actor Tayo Faniran
Woman's lips disfigured after botched filler procedure
Northers will benefit more if southerner becomes president - Senator Ali Ndume
Abducted Imo monarch freed after spending two days in kidnappers' den
Putin's forces strike the city of Lviv 70km from Polish border as US warns he could resort to more n...
Nobody should pressure me about having kids - Actress Dorcas Shola-Fapson says after losing stepsist...
VAT: FIRS threatens those paying to Rivers govt after losing in court
"Real men own up and take responsibility. Na man you be" Yul Edochie hails himself after revealing ...
'This Man Utd team are a waste of space!' - Gary Neville call out Manchester United players after 4-...
Killings: Military allowed bandits displaced in Zamfara to enter Sokoto - Governor Tambuwal
Hand over power to Osinbajo - Gov Ortom tells President Buhari
BBNaija: I see myself making love with Cross outside the house – Angel
Marques Houston, 40, and wife Miya Dikey, 20, welcome first child together
You should be happy for your partner if they are getting married - BBNaija's Leo Dasilva

Nana Tuffour – Wo Do Beku Me